skip to main | skip to sidebar

Sorry lads, but due to the stresses and strains of being an international woman of mystery, this week's post will be an eentsy weentsy bit late. But at least you'll have something to brighten up your Tuesday morning.
Feel free to leave disgruntled comments below.
Posted by Jennikybooky at 12:46 PM 2 comments:

Oh Mary mother of God. I haven’t been this sick in a long time. However, as a result, I haven’t been this skinny in a long time, so it’s alright by me. And somewhere between picking me up off the floor and force feeding me dinners (Next Door Neighbour), ceased to be my and became my BBB (Big Brown Boyfriend). All well and good but Eddie is breathing down the back of my neck like nobody’s business!

You know when you’re really sick and you’re in so much pain that you actually go a bit mental? Well I was right there. You start having them black and white waking dreams about going on the waltzers in Tramore.

The pain was such that I was like “I think I might just die instead of going through this.” And what’s more I was SWEATING, I must have been a million degrees. So I went over to the window and opened it wide letting the blast of Baltic November air blow in on me. Then I said to myself shur have a little lie down on these lovely cool tiles. I’ll just lie down a have a little die for myself, like.

I don’t know what happened then or how long I was lying there for but the next thing BBB came bustin in the door and picked me up off the floor.

“Jesus Christ look at the state of you!” he goes.

Then he put me on the bed and started ransacking my room. Why? Why, I hear you ask? Lads this is so funny. The poor child thought I was after taking an overdose or something and he was looking around for evidence. Shur God love him like.

"What the fuck are you doing?" I said.

White as a sheet he was, reading all my toiletry labels. I was curled up in a ball on the bed, literally in the knots with the laughing. This wasn’t helping my case. In the end anyway I managed to convince him I was only sick, not dying of a body lotion overdose. He made me eat some pasta then and then I went back into my own room to writhe around in peace.

Bit of a depressing week here in Pavia due to being sick and losing sleep due to the financial nightmare that is my life, but thinking of the good times ahead with the family Jacques keeps me going when I’m sitting on the toilet puking into the bidet.

PS Heard there's a lot of rain at home at the moment. People must be bustin' out their arks left right and centre. I can only imagine them up in the Apple Market now "Ten euro the ark! Free box of mars bars with every ark!"

PPS I can't find any pics on the interweb of Naffco54. The first person to find me one will get a present in the post! If you remember any other mortifying trends from back in the day, leave them as a comment below and give us all a good laugh!

A somewhat interesting week in culminating in being threatened by an axe murderer, facing my fear of squatting, skinning both my knees and discovering the joys of chip pizza. Good times. 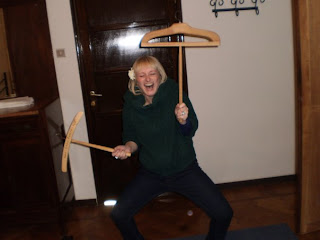 That night we went out to the Irish pub. Now I hadn’t ever used their bathroom before so I was shocked and upset to find that they had those hole in the ground toilets. Now people, anyone who knows me knows that I just do not do anything that involves squatting. I have never peed in a field in my life and I’m not about to assume the position now. I mean, how does one even approach these things? I’m very upset like. But as the proseccos kept coming I had to face the truth: it was time to pee. Oh god, oh god. Had to get detailed instructions from before I could go downstairs. Emerged equally victorious and disgusted. I mean how unladylike. These things really bother me, I wish I could be more like my sister, who’d piss in yer eye. I’m not saying which sister. (It’s Hazel.)

Today Anna and Eamonn went on a jaunt to while I had to go to work in . When they got home we went out for a several drinks. Of course, we all know that the part of the night when you are in the bar drinking the actual drinks is never the funniest part of the night, oh no. The funniest part of the night is when the drinks have been drunk and you’re on your way home and one of ye has a “brilliant idea”. In this case, the ‘brilliant idea’ was had by us when we were going through the underground passage in town. “Oh my god like, let’s recreate the Twilight New Moon poster.” “That is the most ingenious thing I have ever heard of in my life!” This is clearly a completely normal and appropriate thing to be doing at 2 o’ clock of a Friday morning in an underground passageway. See result below.

Anyway then we headed to the taxi rank to get me a taxi home. Not a taxi in sight, and when we rang the taxi company there were no taxis available. In fact, there wasn’t even any traffic. Anna and Eamonn said they’d walk me home the ten minutes up the road. Grand. So we were walkin up the road like the three drunken gowlers we are and no harm came to us, until we were literally outside my front door and I slapped off the ground. Like, literally lying on the ground I was. I have always hated walking down slight declines and this is why. First one foot slipped, but then the other foot saved me, but then that foot slipped and the other one came back to save me; and this must have went on for about ten seconds, all the while I was getting closer and closer to the ground until I eventually admitted defeat and sprawled out face down. You know that feeling, where there is the initial panic when you slip, but then the relief when you realize you have saved yourself, only to slip again and save yourself again and you keep thinking you are going to be ok until slowly, slowly, the realization dawns on you that you and the ground are going to meet face to face. Needless to say we all were creased up laughing. Eamonn tried to help me up “No no!” I said “lets laugh first”! And then when we got enough laughing out, Eamonn was helping me up and he was like “Anna take her other hand” but Anna said “I can’t, I’m peeing”. Ah lads. As Eamonn would say - it’s all fun and games until you’re crawling home.

Woke up this morning with no skin on my knees, and my palm shredded. Not bad for a night’s work. Eamonn and Anna came in to my place and then we headed out for lunch and a stroll. Headed back to my place then for them to collect their bags and they headed off into the sunset. What a great few days. Went to work and then came home and curled up and watched Up.

Right this weekend I am taking it easy after the hectic week. Head into Laura and Sadie’s house for some pizza and prosecco action. However after a miniscule amount of wine, it seemed to have reawakened the alcohol that was lying dormant in my system and I was instantly in the goolies. This is not good. Must stumble home immediately and fall into bed.

Worked all day (with a sprinkling of ’s Next Top Model) then in the evening went into town with the fella next door for an aul stroll. On the way home we got pizza and I, only out of morbid curiosity, you understand, got a Chip Pizza. That’s right, a pizza with chips on it. For 5 euro. I mean come on. I imagined how much money I could make off the drunken louts on John Street in at on a Sunday morning with chip pizzas. But then I thought of the trauma of having to see all the fat wans with their “bet” on clothes stumbling in and stuffing it down their hideous gobs and I thought nah - me mental health is me wealth.

Anyway I said to the fella next door, "this is mad now, the two of us hanging out and you’re only nineteen." “Oh, I’m not nineteen.” He says. Oh thank God, I think to myself, and breathe a sigh of relief.

Now lads everyone calm down right – but this week I found out what it says on the sign! I know, like. I know.

I am looking for work.

I am a deaf mute.

I have had to leave my country.

My father is dead.

“Jesus Christ” I thought to myself, what a shitty hand to be dealt.

Lads I feel terrible for rantin on about the poor fella with the sign outside the supermarket in last week’s post. I mean I walked past him today and I said hello to him and I’m not sure right, but I think he might be a bit simple! God forgive me!

In desperation I started begging people to listen to it for me and ended up with a small but powerful army of friends listenin in for me (thanks again lads). In the end he didn’t read it out. How dare he like, I mean honestly, how rude. Of course now I was already after imagining him reading it out, then the whole of logs onto my blog, leaves millions of comments, all become my followers. Word spreads quickly to ’s top newspapers/magazines/agents and by four o’ clock that day I have a column in U magazine and a three book deal with Poolbeg. I struggle to adjust to the new reality that this won’t be happening. I plunge into the bottomless depths of misery. Sigh. 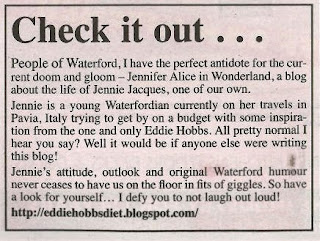 On the world's biggest high I went to training and Iwas like, right, I don’t know what Lorenzo looks like, but if he says well to me I’ll know its him. So I walked in the door and this HUGE fella was standing there lookin at me. “Well girl!” he goes, “Well boy how are you?” I go, thinking this must obviously be him, until another identical fella came over and was like “well girl!” and then another four identical fellas. Ah jaysus. This is gone beyond a joke.

P.S. A lot of people have been asking me how to become followers of the blog. All you have to do is scroll down to the part at the side where it says "Come follow me, children!" and click on "Follow", a new window will open up and you fill in the blanks. Then you turn around three times and say the Hail Mary backwards. Done!

Eddie Hobbs - Extreme to the MAX!

Another year, another Italian city, another chance to make Eddie proud.

Have a gawk, shur