skip to main | skip to sidebar

This week lads was decidedly better than last week because we got a new oven in the house and.... what was the other thing? Oh yeah. The THREE Blog Award nominations! That's all like. Just the three. As in nominated not once, not twice, but thrice. Just to be clear. There are three.
Monday 15th Feb
Not much going on today during the day, but in the evening myseff and himseff decided to go to a carnevale party that was going on downstairs at the last minute. You have to go wearing a mask, and we had nary a mask between us so we had to do ourselves up with my Urban Decay eyeliners. He wanted a Maori mask yoke so I did that for him and then I had no time so I drew a shitty Zorro inspired black yoke over me eyes (see below). That'll do me grand says I and off we went. For about a half an hour and then we nearly died of boredom so we went back upstairs and washed each other's faces and watched a film. Party animals or wha? 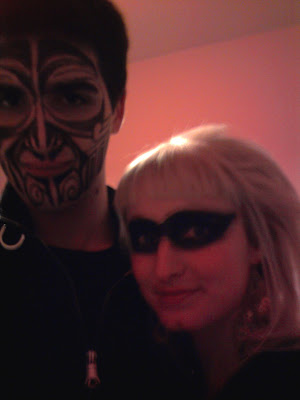 Oh Jesus!
Me nerves!
Just read a comment from the lovely Niamh on Week Nineteen and nearly fell sideways off the bed!
My blog is nominated for three big fat juicy filthy with the dirt Irish Blog Awards!
Breathe in...breathe out...
Needless to say a bit of wee came out.
And then I did a little dance.
Then I fired up the bidet. Ye know yerselves, lads, the way these things go like.
I want to say a big thank you to all the lovely people who nominated me. Thanks for following my blog lads.
No really, thanks.
Well done to everyone who got nominated, although I hope you are all deported for smuggling Mexicans over the border so that only I may be on the receiving end of an Irish Blog Award.
You heard me.
Posted by Jennikybooky at 10:09 PM 8 comments:

Oh dear. I started off this week floundering in a fog of despair, which lifted gradually as the week wore on. Things actually started looking up...for about five minutes. Then they swiftly looked back down again. D'oh!
Monday 8th Feb
My good friend Siobhan from down Wexico way came over for a few days last Thursday. during that time we partook of various fun activities such as: 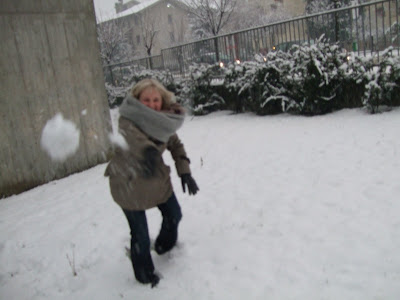 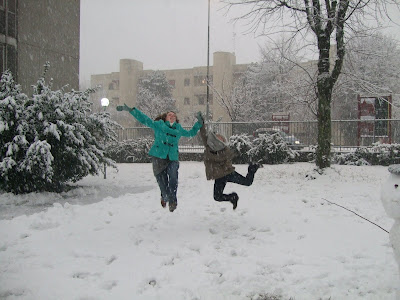 This blogger will self destruct in five...four...three...two...oh shit hang on I left the oven on!

Now lads. There comes a time in everyone's life when they hit rock bottom. That time for me is now.
Last night myself and Laura decided to go on a bit of a Nazi-esque fitness regime to turn ourselves into two sleek running machines over the next few weeks. This of course includes a balanced diet blah blah yawn. All well and good, I hear you say. Well we were starting off this morning, and I woke up and had an apple and sat down at my laptop, feeling proud of myself.
Cut to 15 minutes later and I had eaten 2 cakes and 7 Reese's peanut butter cups. Fast forward another few hours and I had a kebab and a can of coke for lunch. In between these food-related activities I lay face down on the bed making whiney animal noises. After the kebab I played Zuma for 4 hours and then lay down and made some more animal noises.
Keeping in mind of course that I have emails to be sending and blogs and articles to be writing.
What the flip is going on eh? I simultaneously feel like running ten miles and sleeping for a week. I just don't know what's up with me at all at all.
Actually I do know what's up with me. I'm fed up! Fed up so I am! Fed up of this being broke lark! Sick to the back teeth of working me arse off and still not havin a pingin rua! Yer man Valentin outside the supermarket has more money than me! Eddie Hobbs my arse - the bastard never even emailed me back. How rude.
I know we are all in the same boat, but we are allowed to be pissed off about it. I'm feckin sick of calculatin me shoppin to the cent as I go around the supermarket and subsequently gettin a dose of SAS as yer wan is beepin through me shoppin at the till. I want to waltz in and throw a rake of shite in the basket and breeze up to the till, not a bother on me.
But you know what I really want? I want clothes! Clothes and shoes and underwear and ridiculously priced stockings and hair flowers and dickie bows. I want to go on me holidays and drink overpriced plonk and eat weeping tiger steak. I want BRAND NAME CEREAL. I'm talking Frosties, Special K and Weetabix instead of Sugar Flakes, Wellness Flakes and Wheat Bisks. Basically I just want to STOP WORRYING ABOUT MONEY.
I mean, I am a lady, I should be thinking about rainbows and puppy dogs and butterflies, not how much I can save versus how much I can spend. Having to think about money non feckin stop is tiring and it's really starting to wear me down.
Morale is low lads. Morale is fuckin low.
Hence the absence of real blog post. Doing that would take up valuable energy that could be used for eating shite.
That's if I could afford to eat shite.
But shur look, at the end of the day I suppose I should just take stock: I have two arms and two legs and I'm healthy and I have a lovely family and lovely friends. My Mammy always says "Your health is your wealth" and she is right.
I still want brand name cereal though.
Posted by Jennikybooky at 4:07 PM 10 comments:

Eddie Hobbs - Extreme to the MAX!

Another year, another Italian city, another chance to make Eddie proud.

Have a gawk, shur